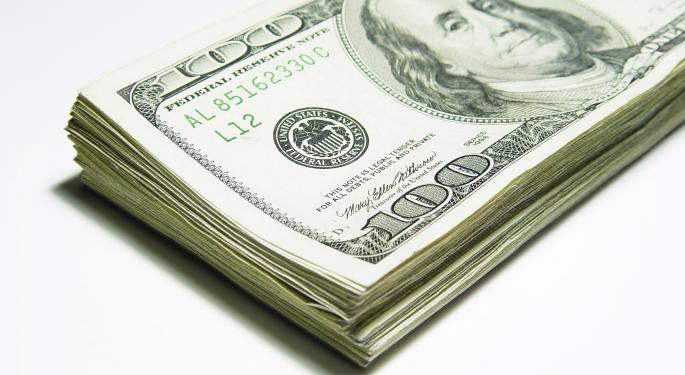 Stocks under $10 are like the red-headed stepchildren of Wall Street, and that’s exactly why David Peltier invests in them.

“The real reason we’re involved in these companies is because they’re underfollowed by the rest of Wall Street,” Peltier told Benzinga.

Peltier manages a portfolio for TheStreet called “Stocks Under $10.” He said his portfolio has a diverse group of stocks, including both small caps and blue chip dividend stocks.

He was recently a guest on Benzinga’s #PreMarket Prep show to talk about stocks under $10, dividends and interest rates.

He said the idea behind his portfolio is that retail investors have always been drawn to low-dollar stocks.

“Folks would much rather own 100 shares of a $5 stock than they would a share of Google, even after the recent split,” he said. “And I think that’s one of the reasons why you’ve seen so many splits with some of the larger companies out there in recent days.”

Since those low-priced stocks are often overlooked, Peltier said he’s able to find companies at a much cheaper value. By getting in early, he said he’s found that over time, it’s possible to get a bigger gain.

A few stocks on Peltier’s radar are in the homebuilding sector, including Builders Firstsource (NASDAQ: BLDR) and Standard Pacific Homes (NYSE: SPF). They’re both trading down on the $7-8 level, but he thinks they’ll be closer to the double digits by the end of summer.

“I agree that’s a more controversial stance, but that’s one that I don’t mind — buying those two stocks when they’ve been knocked down a little bit,” he said.

Since he tracks stocks under $10, Peltier said that he does follow the marijuana sector, but he tends to focus on large stocks like GW Pharmaceuticals (NASDAQ: GWPH).

“In general, with stocks under $10, we have a minimum market cap of $100 million,” he said. “So, that does unfortunately exclude a lot of the marijuana stocks.”

Many people will try to chase the highest dividends on the market, Peltier said. He looks for dividends that yield at least three percent.

But more importantly, he’s looking for companies that can grow their dividend each year.

“There’s a very select list of stocks that, for the last 20 to 50 years or so, raised their dividends consistently every single year,” he said.

He said Altri (ELI: ALTR) is an example of a stock that is on that list, because it’s dividend gets raised every August.

The other criteria that Peltier and his team look at is that if a company earns at least twice as much as it pays out in dividends. Even if a company has a bad year, it can probably sustain itself without having to cut the dividend.

“The worst thing you can see is for a company to cut its dividend,” he said. “Very rarely does a company or stock every repair from that.”

Dividends aren’t for everyone

Peltier said that even if a company can afford to pay out a dividend, that doesn’t necessarily mean it should. Apple (NASDAQ: AAPL) never paid dividends until the passing of former CEO Steve Jobs.

“My honest opinion is that Apple got bullied into paying a dividend,” he said.

If Peltier was an investor, he said he wouldn’t mind getting a two percent dividend yield for his stock, but he doesn’t really think the company is benefiting from it. He said the money could be used better elsewhere.

“The problem for Apple paying a dividend to me is that I don’t think Apple is really mature yet. I think they’re still growing,” he said. “I think a better place for them to invest that money would be into acquisitions.”

Check out his full interview here:

Comments Off on Best one dollar stocks