Share All sharing options for: Why Hurricane Maria is such a nightmare for Puerto Rico 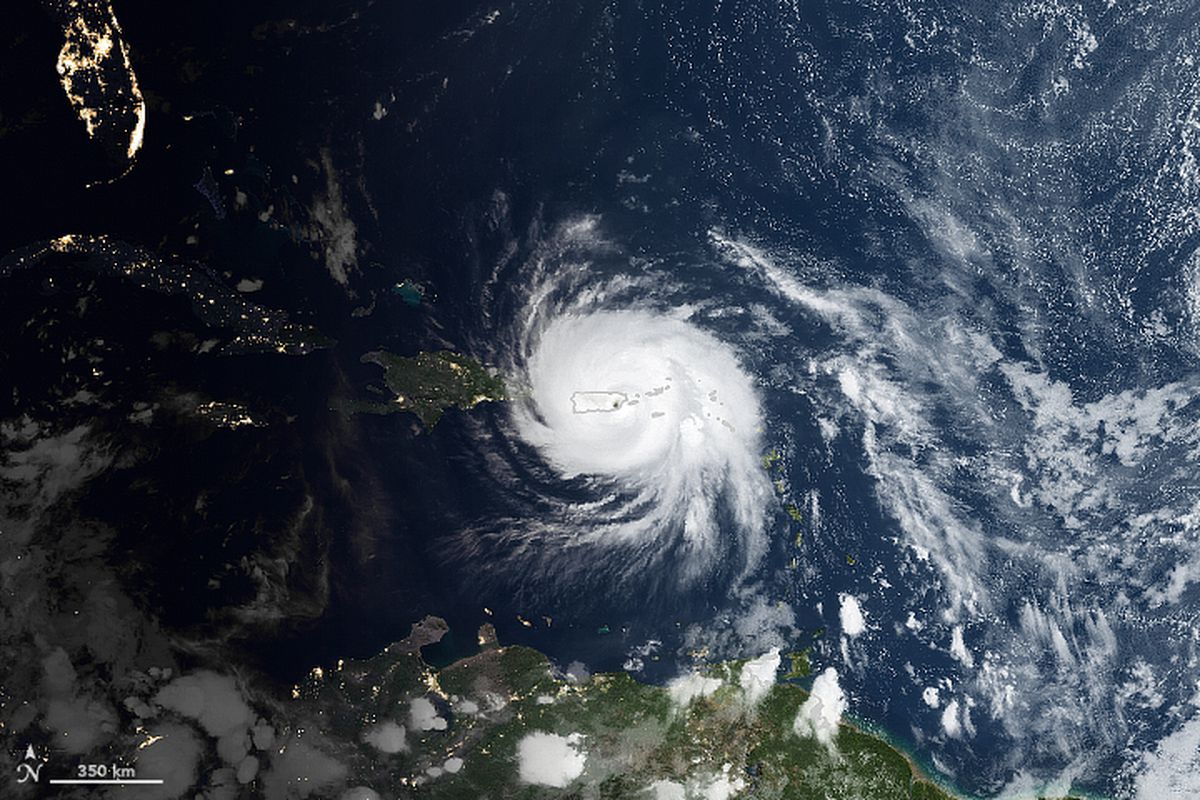 When Hurricane Irma was advancing toward Florida in early September, weather officials were looking at a very scary scenario: an extremely powerful Category 4 or 5 storm hitting with 150 mph winds, flooding rains, and up to 15 feet of storm surge for coastal cities like Miami and Tampa.

But there’s always some unpredictability about a hurricane’s path, and Florida got lucky: The worst-case scenario didn’t happen, due to small changes in Irma’s path.

Puerto Rico had no such luck with Hurricane Maria. On Thursday, it seemed that forecasters’ dire scenario played out with the storm’s direct hit of the island, home to 3.4 million US citizens. When it made landfall, Maria took a course that bisected the island from the Southeast to the Northwest. “It was as if a 50- to 60-mile-wide tornado raged across Puerto Rico, like a buzz saw,” Jeff Weber, a meteorologist with the National Center for Atmospheric Research, says. “It’s almost as strong as a hurricane can get in a direct hit.”

By the record books, it was the fifth-strongest storm ever to hit the US. At least six people died in the storm in Puerto Rico, the New York Times reports. And the repercussions are ongoing. On Friday, the National Weather Service issued a dire warning about the Guajataca Dam in the northwestern corner of the island, which is reported to have broken, threatening downstream areas with deadly floods. All homes in the area are being evacuated.

This is an EXTREMELY DANGEROUS SITUATION. Busses are currently evacuating people from the area as quickly as they can #prwx

Communications to and from Puerto Rico are strained (cell service has been all but wiped out on the island; even the governor couldn’t get through to his parents as of Thursday), but the situation on the ground sounds very grim. There is no electricity on the entire island — and it could remain that way for months. Whole communities are likely destroyed. It’s probable the island saw near-record levels of rain and flooding.

“We’re talking here about major devastation,” Carlos Mercader, a spokesperson for the Puerto Rican government, told PBS NewsHour Wednesday. “And when we say major devastation, that means that in terms of infrastructure, we have full communities that 80 or 90 percent of the homes are a complete disaster. They are totally lost.”

Maria is a catastrophe that will scar Puerto Rico for months and years. Here, Weber and Stacy Stewart, a senior hurricane specialist at the National Hurricane Center, explain why it got so bad.

There have been bigger storms than Maria. Its hurricane force winds extended about 50 or 60 miles out from its center, whereas Irma’s extended around 80. But here, size didn’t matter.

Maria charted a course directly over Puerto Rico, passing around 25 miles away from San Juan, the capital, which is home to around 400,000 people. No nation or territory could suffer such a direct hit without some damage. 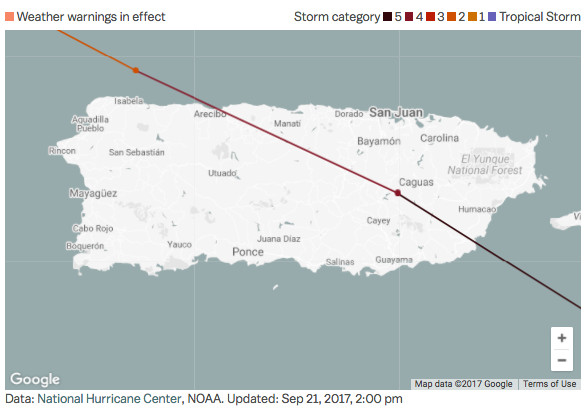 This is comparable to a medium-size tornado passing through an entire country. But usually tornadoes don’t also come with a massive amount of rain. 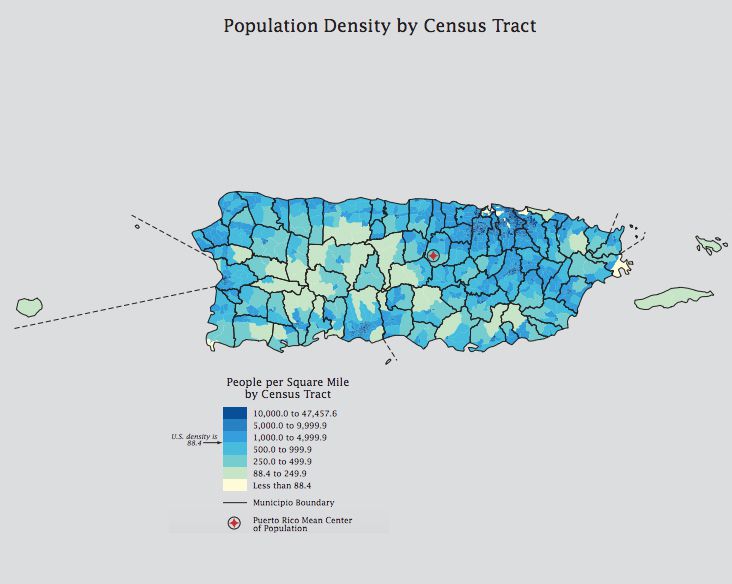 Maria’s storm track put it near Puerto Rico’s most populated areas. 2010 US Census

Maria was the strongest storm to hit the island in 80 years. And even though the threat exists every year, many homes in Puerto Rico aren’t built with hurricanes in mind. Puerto Rico Gov. Ricardo Rosselló told reporters that wooden, flood-prone homes on the island “have no chance.”

Parts of Puerto Rico saw more than 30 inches of rain during the storm. That amount of extreme rain turns tiny streams into gushing floods. It’s smaller than, but comparable to, the huge amounts of rain we saw with Hurricane Harvey in Houston (some areas in the city got close to 50 inches).

That type of rain brings “catastrophic” floods, the National Weather Service reports. And it’s expected to continue through Friday.

“Flash flood emergencies continue in portions of Puerto Rico due to persistent heavy rainfall from Maria’s trailing rainbands,” the National Hurricane Center reported Thursday, well after Maria’s eye had moved on from the island. “Catastrophic flooding is occurring on the island, especially in areas of mountainous terrain, and everyone in Puerto Rico should continue to follow advice from local officials to avoid these life-threatening flooding conditions.”

Making things worse: “Maria is moving away very slowly,” Weber says, at around 9 mph. Some other hurricanes move faster, at around 15 mph. Slower speeds mean more rain can be dumped over an area. (This is what happened with Harvey, which crawled over Texas at around 3 mph.)

The National Hurricane Center’s Stewart also mentions that many of the island’s weather stations were knocked offline during the storm. So the absolute figures on rainfall and wind speeds are not yet known — and could be even higher than what we already know — and they won’t be known until crews from the National Oceanic and Atmospheric Administration visit these locations.

“Even though the power is out and the [weather stations] weren’t operating in real time, many of these instruments are still recording the data, and we have to go in, retrieve the data, and play it back,” Stewart says.

Either way, it’s still too early for NOAA crews to go out and inspect, he says.

3) The geography of the island exacerbates wind, rain, and flooding

Puerto Rico is a mountainous island. And to some extent, its highlands helped sap some overall strength from Maria. When it emerged out of the island, Maria downgraded to a Category 2. But the mountains might have also caused the storm to wring out more water and intensify winds while it was traversing the island.

“Watching the eye go over Puerto Rico, it was very unusual, unlike anything I’ve ever seen before,” Weber says. Usually, the eye takes a straight-line course through an island. But when the eye came into contact with the mountains, it bounced around like a pinball. “That could have exacerbated the damage, could have damaged a wider area with that eye wall dancing around like that,” he says.

Weber points out that the valleys could have acted like channels for wind, causing the speeds to accelerate as the storm passed through them.

The mountains also exacerbate the rain and flooding. “When you have a circulation of a tropical cyclone, wind and moist air are lifted up over the mountains,” says Stewart. Like a washcloth through a wringer, the mountains squeeze more rain of the system — “at least on the order of 10 to 30 percent compared to moving over flat terrain,” he says.

Then the mountainous terrain creates the problem of water pooling from the heavy rainfall. “Any small streams [and] valley areas will become flooded very quickly because the water has no place to go,” Stewart says.

Some areas of Puerto Rico saw around 9 feet of storm surge, the coastal flooding that is often the most deadly component of a hurricane. But here, Puerto Rico was slightly lucky. Because of its mountainous geography, the surge probably didn’t get more than a few hundred feet inland in many locations.

4) Puerto Rico was just beginning to heal from Hurricane Irma. And its economy was already sagging.

Before Maria hit, around 60,000 people on the island were still without power from Irma. And any power outage there is a serious issue, as Vox’s Alexia Fernandez Campbell explains, because the government is broke. Its infrastructure is aging and in disrepair on a good day. And it can’t borrow money to fix it. Campbell explains:

It all comes down to money, and the government of Puerto Rico doesn’t have it. The island, which is a US territory, filed for bankruptcy-like protection earlier this summer, and is in the process of restructuring its debt. Now the public utility company is in a severe state of financial distress, unable to modernize its system and facing a shortage of high-skilled workers. Even FEMA relief money that Congress will likely authorize will be of limited help in such an environment.

Remember: We still have more than a month left of hurricane season. More storms are likely.

We’ve now seen four extremely strong storms in quick succession — Harvey, Irma, Jose, and Maria. But both Weber and Stewart agree it’s too soon to call this hurricane season abnormal. “This is still very much in line with what we saw in 2005,” Weber says, referring to the year Hurricane Katrina wrecked New Orleans.

But if these strong Category 4 and 5s continue into October, he says alarm bells will start ringing. (For more on what we know about climate change and this year’s hurricanes, read Dave Roberts’s piece at Vox.)

One explanation for why the season is so active is that all of the components that make hurricanes are near ideal conditions: The ocean waters are at their warmest they get all year (and are somewhat hotter than usual). And there’s very little wind shear (upper-level winds that can blow the tops off storms.)

One bit of good news: Huge storms like Irma and Maria churn up the oceans beneath them and actually cool them down a bit. So if another storm approaches Puerto Rico soon, it will have less energy to feed on.

Comments Off on Hurricane mary