WHAT on Earth are these super skilled combat troops doing in the Arctic?

The Russian military have released footage of their special forces skydiving into the North Pole amid a wave of conspiracy theories.

The video follows a series of top secret military drills in the snowy landscape which have prompted worldwide confusion and fear over what it means.

But a full explanation behind the drills in the remote region remains elusive.

In the video, soldiers are seen waiting in a plane zooming across a snowy terrain. 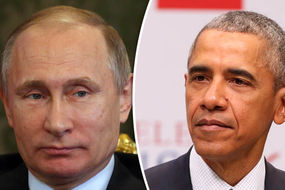 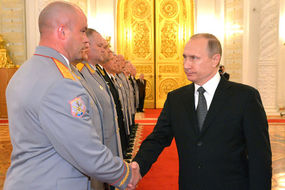 The special forces then caught running out of the flying plane before landing in the North Pole.

They quickly detach themselves from their parachutes and grab their guns to be combat-ready.

The armed group then deploy across the area, hike for 80 miles in the snow and carry out live fire exercises to destroy “enemy command posts”.

During one drill, soldiers are even seen firing large guns while driving on snowmobiles.

It’s so that, at any necessary moment, we can carry out any order of any difficulty from our commander

Once the drills are finished, the soldiers then pose with both the Russian flag and the flag of Chechnya.

The drills were headed up by Daniil Martynov, an aide to Putin’s strong ally Chechen Leader Ramzan Kadyrov.

He said: “We are training in all fields 24 hours a day.

“Today we’re in the Arctic, tomorrow we’re going to the desert.

“The day after tomorrow we’re going to the mountains.

“In a week we’re going to some other place.

“It’s so that, at any necessary moment, we can carry out any order of any difficulty from our commander.”

The mysterious drills comes as a new Russian army base in the disputed Arctic region was labelled “combat ready” by the Interior Ministry.

Russia is also busy building six new bases in the Arctic and putting modern submarines with nuclear warheads into service around the area.

The latest moves are widely interpreted at being aimed as a warning to NATO members.

The area around the pole is not yet divided up but the waters are claimed by Russia, as well as by three NATO members: America, Denmark and Canada.

US senators have warned that the North Pole could be the next “land grab” by Russia, following its recent intensive military buildup.

Senator Dan Sullivan of Alaska said: “The Russians are playing chess in the Arctic and our administration still seems to think it’s tick-tack-toe.”

However, social media users pointed to a possible Russian “dump of nuclear waste” in the Arctic.

Some wondered if the Russian moves were preceding a rise in Arctic tourism, or a move to start “World War Three”

Other conspiracy theorists even suggested that Putin was “coming for the Nazi bases in the North Pole” following Hitler’s infamous interest in the tundra landscape.

Comments Off on North pole conspiracy