Experts on Turkish politics say the use of that term misunderstands what it means in Turkey—and the ways that such allegations can be used to enable political repression. 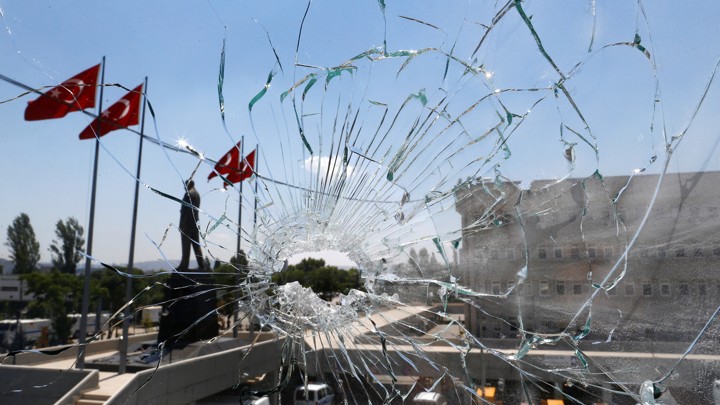 Over the last week, the idea of a “deep state” in the United States has become a hot concept in American politics. The idea is not new, but a combination of leaks about President Trump and speculation that bureaucrats might try to slow-walk or undermine his agenda have given it fresh currency. A story in Friday’s New York Times, for example, reports, “As Leaks Multiply, Fears of a ‘Deep State’ in America.”

It’s an idea that I touched on in discussing the leaks. While there are various examples of activity that has been labeled as originating from a “deep state,” from Latin America to Egypt, the most prominent example is Turkey, where state institutions contain a core of diehard adherents to the secular nationalism of Mustafa Kemal Ataturk, which is increasingly being eroded by the government of Recep Tayyip Erdogan. Turkey has seen a series of coups, stretching back to 1960, as well as other activity attributed to a deep state.

It’s tempting to view the leaks about General Michael Flynn and other matters as a push to undermine the Trump presidency, though well short of coup, and therefore to compare it to the Turkish deep state. Some progressives have expressed a hope that bureaucracy might serve as a check on Trump, though they have generally avoided calling this a deep state. But Trump’s defenders, both in Congress and on the fringe right, have employed the term, as have centrist observers and leftist critics of the national-security state. Trump has not yet used the phrase, but it seems like only a matter of time before it pops up in some late-night or early-morning tweet.

But experts on Turkey are not so quick to follow suit. They see a couple of problems with the analogy. First, it’s not a precise application of the term; it portrays any sort of resistance to the regime as a “deep state,” failing to isolate what truly makes the shadowy structures in places like Turkey different. Second, a review of Turkish politics over the last decade shows the dangers in allowing a deep state to become a real menace in the mind of the public.

“Be careful playing with the deep-state idea, because it can so easily get out of control that it becomes a monster that helps whoever’s in charge curb freedom and intimidate dissidents, because it’s such a nebulous concept,” said Soner Cagaptay, who directs the Turkish Research Program at the Washington Institute for Near East Policy. “You don’t have to prove that it exists. Once [the notion is] out there, and the public starts to believe it, anybody can be attached to it.”

It’s all well and good to argue that there are similarities between the Turkish deep state and American resistance to Trump. There are even some shared elements, like the presence of a corps of career government employees who see themselves as the last line of defense for longstanding national values against an insurgent president seeking to tear them down. It’s also interesting that members of the military have seemed wary of Trump, warning of the importance of NATO and pushing back on reported plans to bring back torture—just as the military is the bastion of secularism in Turkey. As Cagaptay puts it, Turkey has historically had three checks on government power, two democratic (the courts and the media) and a third undemocratic: the military.

These superficial similarities threaten to overshadow some of the deeper differences, though. Zeynep Tufekci, a Turkish sociologist and writer at the University of North Carolina, tweeted a string of criticisms about the analogy Friday morning. “Permanent bureaucracy and/or non-electoral institutions diverging with the electoral branch [is] not that uncommon even in liberal democracies,” she wrote. “In the Turkey case, that’s not what it means. There was a shadowy, cross-institution occasionally *armed* network conducting killings, etc. So, if people are going to call non electoral institutions stepping up leaking stuff, fine. But it is not ‘deep state’ like in Turkey.”

Omer Taspinar, who teaches at the National Defense University, took a similar position. “The Deep State was a kind of criminal organization,” he said. “It was not the judiciary, the civil society, the media, or the bureaucrats trying to engage in checks and balances against a legitimately elected government. What we’re witnessing in the U.S., it’s basically the institutional channels.”

The Turkish deep state, historically, was willing to use violence to achieve its ends, and held close ties to organized crime. The resistance against Trump has involved leaking of government information—something that is sometimes criminal, and occasionally prosecuted, but is meaningfully different from killing or beating opponents.

The fact that the deep state in Turkey was known for lawlessness and criminality meant that it was disliked by a wide range of factions there, from liberals to the religious, more conservative factions that the military repeatedly slapped down as they gained power. That began to change with the rise of Recep Tayyip Erdogan. Erdogan had previously been banned from government for violating rules against Islamist politics, but he returned in a more moderate guise, becoming prime minister in 2003. (He became president in 2014.) Erdogan learned to use the idea of deep state as a cudgel against it.

“It became such common currency that it allowed Erdogan’s AKP government to cripple Turkey’s democratic checks and balances, including media and courts, many of whose members Erdogan connected to this alleged deep state and then locked up during a set of trials collectively known as Ergenekon,” said Cagaptay, who writes about Erdogan’s power grab in a forthcoming book The New Sultan.

Those trials began in 2008. Erdogan started small: He first arrested “people who looked like they were bad apples: Former military officials, connected to loan sharks, and everybody applauded that,” Cagaptay said. Then the investigation expanded. The murder of a prominent journalist was pinned on the deep state; then a large portion of Turkey’s active-duty generals and admirals were accused.

The trials effectively crippled the military, even though they were based largely on flimsy evidence. “The indictment basically said, ‘It is such a good plot, and it is hidden, because nothing that the deep state does is ever transparent,’” Cagaptay said. Once the military was neutralized, Erdogan was in a strong position. The army had removed prime ministers who got too ambitious in the past, but they were no longer in a position to do so. (The failed coup in July 2016 further affirmed just how weakened the military was.)

“The Ergenekon case was the pivotal moment in Erdogan’s undermining of Turkish democracy, because he used it then to go after courts and media, intellectuals, business people, pretty much anybody who did not support his political agenda,” Cagaptay said. By the time a Turkish court overturned all 275 Ergenekon convictions in 2016, it didn’t matter: The damage to institutions was done, and Erdogan had consolidated his grip on power.

That’s the danger of the deep-state analogy, and the danger of trying to operate a deep state: It is liable to facilitate its own destruction. It can place some real restraints on a government, up to a point. But if a leader can convince the public that it exists and is a real threat, he can manipulate that threat into empowering himself, undercutting the values that the deep state had pretended to safeguard. And it is a perfect foil for a demagogue.

Cagaptay, like Tufekci and Taspinar, argued the American analogy was a bad one. But even if that is true, allegations of a deep state could be an effective foil for Trump, just as they have been for Erdogan.

“It’s such a catchy concept, because it helps explain so much,” Cagaptay said. “If you want to explain inefficiency, it’s not inefficiency but it’s a deep state. Why did the U.S. government fail in a certain policy? Oh, it’s because the deep state wanted it to fail, not because it was bad execution, or bad policy, or combination of both.”

These are all good reasons to hesitate before labeling resistance to Trump, whether in the form of bureaucratic obstruction or leaks to the press, as the work of an American deep state. There is the important caveat that if the national-security state truly were plotting to topple a duly elected president, in the manner of past Turkish coups, that would be as serious a danger to the republic as anything that Trump could do. Unfortunately, it is the practice of the national-security state, like the deep state, to work in darkness and obscurity, but there is also no evidence yet to support such a vast conspiracy—and recalling how Erdogan used lack of evidence as proof of nefarious behavior, it’s important to move cautiously in assigning motives.

Comments Off on Npr deep state